Can Christians believe in Evolutionary Biology? That depends. There are several theories of evolution including:

Below is a summary by InspiringPhilosophy titled, “Can you be a Christian and Believe in Evolution?”

There are also evolutionary biologists that have different interpretations of the Bible. For example, Dr. Simon Conway Morris is a Christian who believes in process structuralism. Conway Morris, however, does not believe in a literal interpretation of the Book of Genesis. 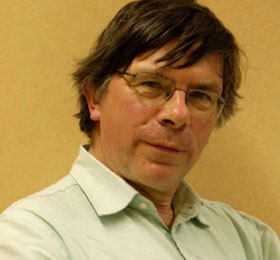 “Evolutionary biology rejoices in the diversity of life, but this comes at a cost: other than working in the common framework of neo-Darwinian evolution, specialists in, for example, diatoms and mammals have little to say to each other. Accordingly, their research tends to track the particularities and peculiarities of a given group and seldom enquires whether there are any wider or deeper sets of explanations. Here, I present evidence in support of the heterodox idea that evolution might look to a general theory that does more than serve as a tautology (‘evolution explains evolution’). Specifically, I argue that far from its myriad of products being fortuitous and accidental, evolution is remarkably predictable. Thus, I urge a move away from the continuing obsession with Darwinian mechanisms, which are entirely uncontroversial. Rather, I emphasize why we should seek explanations for ubiquitous evolutionary convergence, as well as the emergence of complex integrated systems. At present, evolutionary theory seems to be akin to nineteenth-century physics, blissfully unaware of the imminent arrival of quantum mechanics and general relativity. Physics had its Newton, biology its Darwin; evolutionary biology now awaits its Einstein.”

“There is absolutely no problem in combining a scientific career with being a person of faith. It is not obligatory. I do not think is essential, but it seems to me that, actually, the reason why I have a Christian faith is partly because I am convinced of the truth of the Gospels. I think what they said did happen, and you cannot ignore that. But correspondingly, as I have already indicated, I think science and religion have many things in common. Both are journeys of inspiration, both of them generate feelings of amazement, of astonishment, and make you think those things are incredible. And both of them invite you to think about new worlds.”

Simon Conway Morris ) is an English paleontologist, evolutionary biologist, and astrobiologist known for his study of the fossils of the Burgess Shale and the Cambrian explosion. The results of these discoveries were celebrated in Stephen Jay Gould's 1989 book “Wonderful Life.” Conway Morris's own book on the subject, “The Crucible of Creation” (1998), however, is critical of Gould's presentation and interpretation.

He has held the Chair of Evolutionary Paleobiology in the Department of Earth Sciences, University of Cambridge since 1995. He is renowned for his insights into early evolution and his studies of paleobiology. He gave the Royal Institution Christmas Lecture in 1996 on the subject of The History in our Bones. He was elected a Fellow of the Royal Society at age 39, was awarded the Walcott Medal of the National Academy of Sciences in 1987 and the Lyell Medal of the Geological Society of London in 1998. 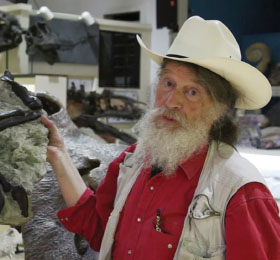 “The view that religion always is the enemy of science is simply, historically false. The first universities – including Oxford – were set up by the Church. The first fossil museums – again, Oxford – were Church supported. And wonderful world of Mesozoic monsters weas revealed in the early 1800s by pious scholars who analyzed skeletons five days a week and then gave sermons on Sundays

The lesson is history is simple:
Dinosaurs and fossils and Deep Time don’t belong to Bible-bashing atheists. The wonderful pageant of prehistory is the proud legacy of evangelicals who searched for the truth in the pages of Scripture and the chapters written in stone.”

Robert Thomas Bakker is one of the most recognized paleontologists working today. Bakker was among the advisers for the movie Jurassic Park, and the character Dr. Robert Burke in the film The Lost World: Jurassic Park is based on him.

Bakker helped reshape modern theories about dinosaurs, particularly by adding support to the theory that some dinosaurs were endothermic (warm-blooded). Along with his mentor John Ostrom, Bakker was responsible for initiating the ongoing "dinosaur renaissance" in paleontological studies, beginning with Bakker's article "Dinosaur Renaissance" in the April 1975 issue of Scientific American. His specialty is the ecological context and behavior of dinosaurs.

Bakker has been a major proponent of the theory that dinosaurs were warm-blooded, smart, fast, and adaptable. He published his first paper on dinosaur endothermy in 1968. His seminal work, The Dinosaur Heresies, was published in 1986. He revealed the first evidence of parental care at nesting sites for Allosaurus. He also observed evidence in support of Eldredge and Gould's theory of punctuated equilibrium in dinosaur populations. Bakker currently serves as the Curator of Paleontology for the Houston Museum of Natural Science. 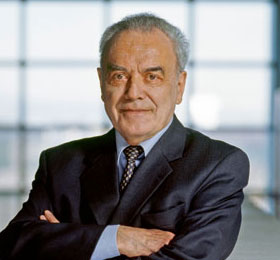 “Although a biologist, I must confess I do not understand how life came about....I consider that life only starts at the level of a functional cell. The most primitive cells may require at least several hundred different specific biological macro-molecules. How such already quite complex structures may have come together, remains a mystery to me. The possibility of the existence of a Creator, of God, represents to me a satisfactory solution to this problem… I know that the concept of God helped me to master many questions in life; it guides me in critical situations, and I see it confirmed in many deep insights into the beauty of the functioning of the living world.”

Werner Arber is a Swiss microbiologist and geneticist. Along with American researchers Hamilton Smith and Daniel Nathans, Werner Arber shared the 1978 Nobel Prize in Physiology or Medicine for the discovery of restriction endonucleases. Their work would lead to the development of recombinant DNA technology.

Arber received his doctorate in 1958 from the University of Geneva. He then worked at the University of Southern California in phage genetics with Gio ("Joe") Bertani starting in the summer of 1958. Late in 1959 he accepted an offer to return to Geneva at the beginning of 1960, but only after spending "several very fruitful weeks" at each of the laboratories of Gunther Stent (University of California, Berkeley), Joshua Lederberg and Esther Lederberg (Stanford University) and Salvador Luria (Massachusetts Institute of Technology).

Back at the University of Geneva, Arber worked in a laboratory in the basement of the Physics Institute, where he carried out productive research and hosted "a number of first class graduate students, postdoctoral fellows and senior scientists." including Daisy Roulland Dussoix, whose work helped him to later obtain the Nobel Prize. In 1965, the University of Geneva promoted him to Extraordinary Professor for Molecular Genetics. In 1971, after spending a year as a visiting professor in the Department of Molecular Biology of the University of California in Berkeley, Arber moved to the University of Basel. In Basel, he was one of the first persons to work in the newly constructed Biozentrum, which housed the departments of biophysics, biochemistry, microbiology, structural biology, cell biology and pharmacology and was thus conducive to interdisciplinary research.